X
This site uses cookies to provide and improve your shopping experience. If you want to benefit from this improved service, please opt-in.
More Info
Accept Cookies
House of Cheviot | BlogArticlesTweed: The Fabric of the Countryside
Menu
Articles

Tweed: The Fabric of the Countryside

Tweed. Defined simply as ‘a rough-surfaced woollen cloth, originally produced in Scotland’ sybolises country life like no other fabric and is woven into the history of Hawick and the Scottish Borders.

The name ‘tweed’ originates from a misunderstanding in the 1800s when a London merchant received a letter from Hawick about ‘tweel’ (Scots for twill) and mis-read the word as ‘tweed’ understanding it to be named after the river Tweed which flows through the Scottish Borders. The goods were advertised as tweed, and the rest they say is history.

The tweed manufacturing industry developed in the Borders during the Industrial Revolution and has remained at the heart of the area’s identity thanks to Lovat Mill who have a worldwide reputation for woven excellence in design and quality.

Scottish islanders had been weaving and wearing tweed for centuries before it was discovered by wealthy southerners during hunting trips to Scotland. The hard wearing and warm fabric became popular with estate owners and royalty including Prince Albert as it helped to battle the chilly and damp climate. Tweed has been at the forefront of country clothing since the mid 1800s and is still a key part of today’s market. Quality brands such as Farlow’s, Chrysalis England and Purdey are known for their classic yet eye catching collections.

Weaves are often inspired by the landscape. Herringbone is a nod to the coast and Scotland’s fishing heritage and barleycorn resembles barley kernels which highlights our arable farming traditions. The colours echo the sometimes harsh but beautiful terrain of Scotland including heather, bracken, moss green and stormy blues.

Tweed plays a huge part in our business, too. We knit luxury shooting and country socks and often use tweeds as a guide for our colour palette. As country clothing has modernised and become increasingly fashionable thanks to lifestyle brands such as Holland Cooper we’ve had to adapt. There are brighter colours appearing in cloth therefore our range must reflect that.

Whether you’re wearing a simple and elegant tweed jacket with your favourite boots or are dressed in tweeds for a day on the peg, we have the perfect sock pairing for you. As with tweed, hosiery has its roots in Hawick and for more than 20 years we have been designing, knitting and hand finishing our products in our workshop. 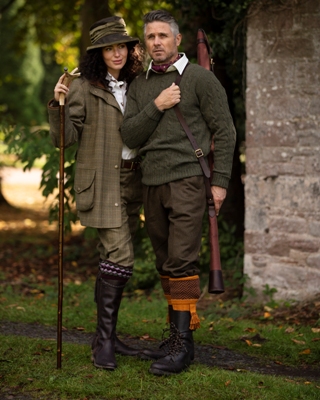 Article Name
Tweed: The Fabric of the Countryside
Description
Tweed sybolises country life like no other fabric and is woven into the history of Hawick and the Scottish Borders. We look at the history of tweed and why it's important to our business.
Author
Ashley Drysdale
Publisher Name
House of Cheviot
country livingfieldsportsHawickshooting sockstweed